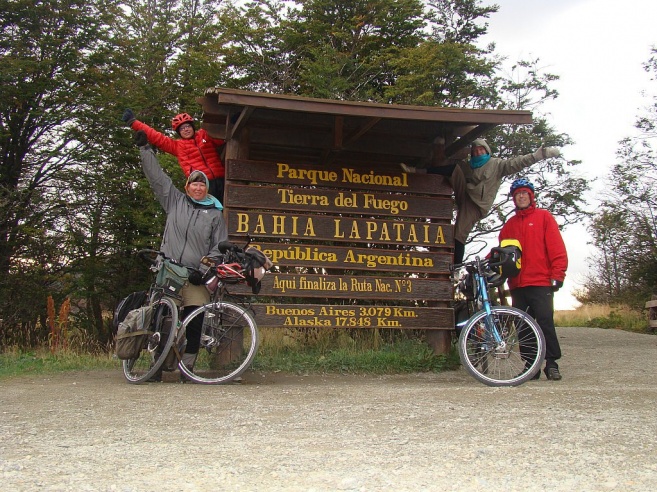 One of the first blogs many hopeful travelling families come across when they start looking at family travel blogs is that of the Vogel family blogging as Family On Bikes. With twin boys aged 10, they started cycling from Alaska with the goal of reaching Argentina at the opposite end of the Americas. Two and a half years later, they achieved their goal.

If you ask the Vogels, they’ll all tell you the journey set out as, and remained, a family journey to spend time together, learn about themselves and other people from around the world.

A secondary aim of the journey was for the boys to set a Guinness World Record as the youngest persons to ride the full length of the Americas. Before starting their journey back in 2008 the family contacted Guinness World Records (GWR) and were provided with the strict list of requirements they’d need to follow and documentation they’d be required to provide to be granted the record.

Unfortunately for the Vogels, on returning home in 2011 after completing their amazing journey and submitting their application, they were informed by GWR that GWR would no longer be including the category Youngest Person to pedal the length of the Americas amongst their records.

Here’s an excerpt from GWRs reply as to why the category has been withdrawn:

Unfortunately, we at Guinness World Records, have decided to rest this record, meaning we have decided to no longer recognise the category as a record, due to the fact that the record would reach an age where a person would no longer be able to break it or attempt (i.e. a two-year old attempting to do it) and as it would become limited under these terms, we choose to to no longer recognise it as a category.

Does this inspiring journey deserve recognition?

We applaud GWR for taking a stance about protecting children from dangerous pursuits, such as those barely in their teenage years trying to set out to sail solo around the world.

However, it is different when they are in the loving company of their family. And continuing with their education, as this homeschooling family did.

Although the Vogel family is the first to say that they would have done the journey any way, they did do some things slightly differently because of the World Record attempt.  They chose a different route, they kept cycling even when the weather was unpleasant or the terrain very tough, even though they could have caught public transport over those little bits if they hadn’t been trying to achieve the record.

Their son, Davy, has put it more passionately than we can:

For the whole three years of our trip, we planned our route according to the guidelines you sent Mom. We started in Prudhoe Bay rather than Fairbanks and we didn?t take the ferry between Belize and Honduras that we wanted to take. You said that we couldn’t take any ferries even though the current record holder took a very long one.

Thinking that I would be in the Guinness Book of World Records helped motivate me during the very tough times of our trip. It made me go even faster the last week or so of our trip. I would probably have hitched a ride when it was very hot or we were climbing a very steep hill, but I didn?t because I wanted to break the record.

Can you just imagine how excited those two boys must have been knowing that after two and a half years of working towards something they’d achieved a world record?

This is a family who planned to set out and have this adventure. It was a secondary thought to them that the boy wanted to attempt the world record. But it’s a thought that helped them get through their journey and it’s an achievement they’ve earned.

Not convinced yet that they’re deserving of the record?

Provided by Nancye from Family on Bikes

Spring 2008 ? received guidelines from Guinness World Records outlining exactly what we needed to do

March 2009 ? wrote to ask question of GWR about rules. They had since changed the rules, but stated they would abide by the guidelines they had originally given us.

March 2011 ? we reached Ushuaia, Argentina after nearly three years on the road. We cycled 17,300 miles through fifteen countries. The boys were 13.

June 2011 ? we submitted the documentation to GWR exactly as they had outlined in the guidelines from 2008

July 25 2011 ? received an email stating they had denied our claim: ?Unfortunately, we at Guinness World Records, have decided to rest this record, meaning we have decided to no longer recognise the category as a record, due to the fact that the record would reach an age where a person would no longer be able to break it or attempt (i.e. a two-year old attempting to do it) and as it would become limited under these terms, we choose to to no longer recognise it as a category.?

July 26 2011 ? received an email from records management from Guinness World Records stating: ?the primary reason for which we could not accept your effort is because our Records Management Team has taken the position, since 2009, to not monitor unsuitable records achieved or submitted by people younger than 16, unless the record is sanctioned by an internationally recognized organization or federation. This aligns such categories with the decisions taken by organizations such as the International Gymnastics Federations to only allow competitors older than 16 or the World Sailing Speed Record Council to only allow those aged 18 and older to participate in solo voyages.?

“Abide by the guidelines they had originally given us”

We don’t think anyone will argue that GWR isn’t doing the right by changing the requirements for world record attempts by people younger than 16 to help ensure the safety of all our children. Having record attemptes by people under 16 having to be sanctioned by an international body is a great thing.

Of course unfortunately for the Vogels, there isn’t really an international body applicable to long distance cycling (although if you can think of one I’m sure they’d love the details!)

BUT the simple facts are Davy and Daryl Vogel were promised back in March 2009 that GWR would abide by the guidelines that they had provided in 2008 to the boys. The boys were told that if they stuck to these guidelines, did everything they were asked by GWR in these guidelines and completed the journey then GWR would stick to theirs.

This seems like a simple issue. It’s about honouring a promise.

An agreement was made. The boys upheld their end of the agreement when most boys their age would have packed up and flown home. Have GWR stuck by what they said they would?

Based on the facts that we have available, it doesn’t seem like they have, even if they’re doing it for what they believe good reason.

We’re already turning into a society that’s turning children into social pariahs, banning them from planes, certain restaurants and cinemas. Do we really need to start breaking promises to our children as well, particularly when they’ve gone to extraordinary lengths to hold up their end of the agreement? What message does this send to our young men and women about how to act in business and as adults?

Should we stop teaching our children that it’s not OK to change the rules midway through a game of football or monopoly? Or are we giving them a false image of the way that the world works by teaching them to stick to the agreed rules as set out at the start of the game?

How many of us grew up reading Guinness World Records and being inspired to strive for better than our best in something in the hope that maybe one day we’d see our name in there?

What would the future be like if kids stop believing in their dreams? Or stopped trying to achieve their dreams for fear of the rules being changed halfway, despite their best efforts?

It is enthralling reading Nancy’s blog about how she was so doubtful if she could do it, but never doubted the abilities of her husband and sons to do it.  It was inspiring to read how she had put aside those doubts because, as a mother, she wanted to help her boys achieve their dreams rather than stand in their way.

Regardless of whether GWR recognise the boys efforts, the two youngest Vogels are world record holders in our books.

But we’re hoping that one day soon, other boys and girls sitting in school libraries laughing over the person covered in the most amount of bees or imagining eating the worlds largest pizza, might also see a photo of these two young boys with their parents in the Guinness Book of World Records and be inspired to come up with an amazing family adventure of their own to undertake.

This article was written jointly by Amy Page from livinontheroad.com.au and Tracy Burns from ourtravellifestyle.com

Tips for Introducing Finger Food to Your Baby

How to Prepare Your Children For Summer