Children On Board – Boating Safety For Kids 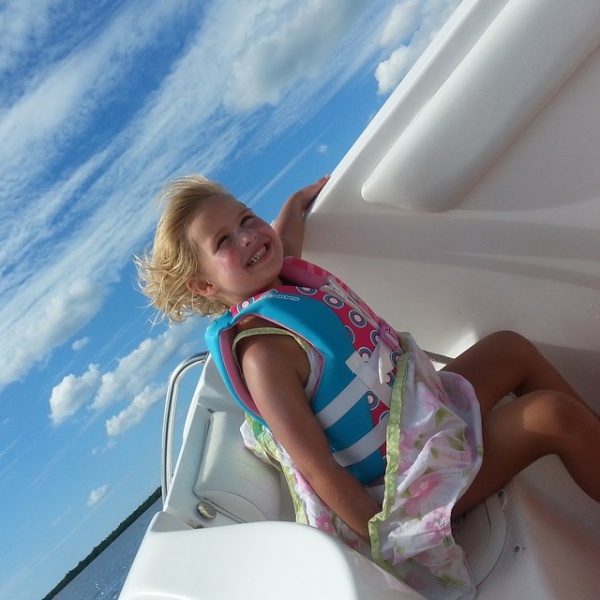 I first climbed aboard my grandfather’s sailboat when I was 7, under the ever watchful eye of my mother. Grandpa would have taken me sailing earlier, but my mother was never much of a boater herself, and she was always on the lookout for new troubles to keep me out off. Her anxiety did not rub off on me growing up, probably because I’m not a parent, not yet at least. However, my sister gave birth to her first child, a baby boy named Nicholas, 12 years ago. That was when I started to understand parental anxiety a bit better. This didn’t prevent me from bringing Nick on board as soon as I figured it was safe enough, which was, in fact, at 5 months old. Nick got a baby sister 8 years ago, Maxine, and she was not as sturdy a baby as him, so her first trip on a boat was at 2 years old.

As a boating family, we raised these kids on safety tips, and I feel there are many others who would benefit from them too. Contrary to popular belief, boats are not dangerous for children, so long as they are prepared well. Almost every marina I ever berthed in had regular boating families, even liveaboard home boat-schooled kids. These kids are water-based natives, and don’t need to be told twice whether something is dangerous or not. I have yet to see a boater kid who acts irresponsibly around a boat, it is in their nature. However, all the kids I know come from families with long traditions of sailing. They already know everything I’m about to write down. It is the newest additions to the boating community that come to us with the question “Are boats safe for my children?”

The first and foremost thing to discuss is a personal flotation device, also known as a life jacket. PFDs are made for infants as well as adults, and the junior-sized ones are so cute, they make us “older kids” feel drab in comparison. Nick had a Batman PFD, Maxine had a pink and orange one. It was easier for Nick to grow into his because he wore one before he was self-aware, but Maxine’s wasn’t orange by accident. All our adult-sized PFDs are orange, and 2-year-old Max loved how hers matched ours. I was thrilled that I inspired her to remain buckled, and it was a while until I dared take my life jacket off in front of her, even though I didn’t actually need one. Children should keep their life jackets on at all times, as soon as they approach a body of water, and this especially goes for young children who can already walk. They have a tendency to stay within sight, but too far to reach them in time should they misbehave. You can never be too prepared with them, but you can keep them safely snuggled in a life jacket.

Protection from the sun should also be a necessity. Sunscreen should come at an SPF of at least 30 to protect your child’s sensitive skin. We used a 45 on both toddlers, as well as an obligatory sunhat the entire time. Nick soon graduated to a baseball cap and an SPF 30, but Maxine burns easily, so she’s still rocking a floppy hat and a 45. It was probably a bit too much, in retrospect, since I had also installed a sun shade on my boat during my sister’s pregnancy. Some sort of canvas, or shade will make sure a family day sailing trip doesn’t become a series of ouchies when you get home. Back then, finding the best shade was a bit of a scramble, but nowadays, every Aussie shipwright knows and works with a decent sail shade company, and every marina has at least one handy shipwright.

Your child should learn to swim as soon as possible, and in the meantime, it should never be tied down to something that doesn’t float. It sounds like a no-brainer, but I have encountered my fair share of parents buckling their kids into car seats, on a boat. They might as well have been tying anchors around their little legs – I shudder to think.

It is important to have at least two adults on board: one to drive the boat, and one to mind the children. Either my sister or my brother-in-law, or both were always on board with us and I was glad of it. Babies are the safest in their parents’ loving arms, and they will spend the larger part of any trip happily snoozing. Toddlers are the real challenge. It is important to prevent them from getting bored and looking for their own source of entertainment. Coloring pages, books, kids’ fishing rods, these are the most optimal toys to keep onboard, and they don’t take up a lot of room. You could take it a step further when they’re big enough and seat them next to the captain of ship. They will be close enough to you, and stoked with their new “title” of co-captain. However, everybody felt the most comfortable when the boat ride itself was the main source of entertainment (why do it, if not for fun?). Just like planning out any family trip with children, there are several types of sailing adventures all boating families know will totally work, and you can find a neat list of boat rides here. The best part is that it works for any marina.

There is much you can do to keep your child safe on board, but what mattered the most to me was to teach Nick and Maxine common boat courtesy. They knew to remain seated while the boat was moving, and to keep their hands away from the edges while the boat was docking. We don’t have a large cabin to keep them safe inside, but if any parents have larger boats, the cabin is a magical place where children don’t ever get hurt or in the way.

These trips helped me bond with my niece and nephew, and I will always remember them as the happiest days of their childhood. Nick will be turning 12 this summer, and he will be officially old enough to apply for a boating license. Not that he’ll be allowed to sail off on his own, but the promotion from co-captain to sometimes-an-actual-captain means the world to him, and we are all proud and excited to see him sail.