Learning made easy: The immersive benefits of travel for kids 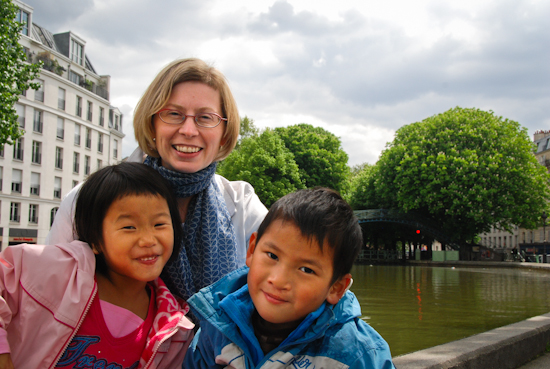 I didn’t get to travel much as a child.

My father was a dentist and lost revenue every time he closed his office, and we spent our few holidays at my grandparents’ cottage. (If that sounds affluent, picture a one-bedroom cabin with no running water that my great-grandfather built with reclaimed lumber after WWII.)

My parents didn’t seem to share my yen for new and interesting places, so I satisfied my wanderlust at the library instead. I knew Holland from Hans Brinker, or The Silver Skates and the Channel Islands of California from Island of the Blue Dolphins and the Canadian north from Lost in the Barrens. I had to wait until I was in my early twenties before I could travel under my own steam. In fact, the first big adventure was a two-week honeymoon in Newfoundland with my husband, Shawn. I loved every minute (okay, not the minute we discovered that our camera had ruined a whole roll of film!) and from then on we took as many trips as we could.

My daughter and son, aged six and four, have had a much different childhood when it comes to travel. Lia and Nico were both born in China, so our life together began on these adoption trips, in buses and airplanes, with sightseeing visits to ancient villages, restaurant meals, hotel beds, and climbs on the Great Wall.

We continued the expeditions with family visits and summer vacations, and a three-month stint in Beijing when Shawn was on parental leave with Nico. And through it all, we conspired to make the travel lifestyle a more permanent thing. We loved what it did for our relationships, our learning, and our creativity, and we knew the kids would get untold benefits from the opportunities that travel presents.

Almost a year ago now, we sold our house in Ottawa and began a more mobile life that has taken us around the world. I was really curious to see how this adventure that we call Operation Hejira would affect our children, and I have two stories that illustrate the kinds of changes that have come about because we jumped into a life of travel with both feet.

We chose Malaysia as our home base for much of the year, partly because there is a sizeable Chinese population there and Mandarin is taught in many schools. We want Lia and Nico to be able to read and speak the language of their first country, and we found a private preschool that had lessons in three languages (English, Mandarin, and Bahasa Malaysian) as well as math, science, and morals. (Yes, we have Colin and Tracy to thank for extolling the virtues of Penang!)

We were a little slow off the draw in getting Lia up to speed with Mandarin. For the first two months of school, she mainly sat and listened during Chinese lessons, since her five-year-old classmates were already ahead of her in speaking and writing characters. In December, we met with her teachers and arranged for her to begin tutoring twice a week.

We were astonished and delighted with what unfolded as Lia began picking up the language. It didn’t hurt that she adored her kind and pretty Chinese teacher, who gave her presents and called her clever. We saw Lia’s progress through little windows – the characters she practiced in her notebooks, the textbooks she brought home to read, the phrases she started to work into conversation.

The first time I heard her rattle through an entire story in Mandarin, I got tears in my eyes. Her face beamed with excitement when she brought home her own copies of her school books to keep, and she insisted on bringing them to the playground and out for dinner. I watched her pen fly across her notebook, hardly hesitating over the many strokes in dozens of characters.

We took a short trip to China at the end of March, which seemed to make clear to Lia how important the Mandarin language is if she wants to spend time in China. We had to rely completely on our guide and translator to help us navigate and have conversations with the people we visited. The director of the social welfare institute where Lia was cared for before her adoption was very pleased with her abilities, and when we visited a village school, the students shouted out the characters that Lia wrote on the board. I believe that all of these experiences have only increased her motivation to learn.

Could we have found this kind of Mandarin education for Lia in Ottawa? Probably not – there are no Mandarin immersion schools there, so she would have had to make do with private tutoring and Saturday morning language classes. She wouldn’t have been able to attend a school with a majority of Chinese teachers and students. And she wouldn’t see Mandarin characters everywhere on shop signs, packaging, and menus.

Another big attraction in Malaysia was year-round summer weather and a swimming pool! After enduring too many biting Canadian winters (Ottawa is the third-coldest capital in the world, after capitals in Mongolia and Kazakhstan), we were ready for sunshine and heat.

Nico has never been a fan of water – as a toddler he let out an ear-splitting shriek whenever his toes touched the bath. Swimming lessons at age two were okay, but he spent most of the time clinging to my body like a monkey. By age three, he was willing to wade and putter around, but heaven forbid if any drop of water touched his face.

When we were looking at apartments in Penang, the attractiveness of the pool ranked high on our list of criteria. We chose a complex that had a lovely recreation area, with a water slide, several smaller shallow areas for kids, and a large deep pool for laps and horseplay.

We soon fell into a routine: the children went to school every morning and came home after lunch. They had quiet time in their rooms, and then we suited up for swimming. Whereas a trip to the pool in Ottawa was a tiring hours-long excursion, this was a quick refreshing dip, as easy as going downstairs in the elevator.

The beauty of this routine was that we didn’t have to push either kid to progress. We had an abundance of time for Nico to get acclimatized at his own pace. Swimming with his sister and other older children gave him the incentive to try new things when he was ready, but there was always something fun to occupy him: a flutterboard, a floating ring, a ball. We found a comfy swimming vest for him and he could pool-hop wherever he pleased. He slowly got more brave about putting his face in the water.

The transformative moment happened in January when we bought Nico goggles and ear plugs. Suddenly, going under the surface felt safe and exciting for him. During that first session, I held his hips and swooshed him through the water like a dolphin, and each time he would come up and demand, “Again! Again!” Returning to the baby pool, he plunged in with abandon and came up with a grin of joy and accomplishment. For the first time, he would beg to go swimming as soon as he got home from school.

Just before we left Penang in April, another breakthrough: Nico went down the water slide for the first time. He’d been watching from the sidelines for months, and every so often we would ask if he wanted to go, but he always shook his head and went back to his games. On the momentous day, Shawn encouraged him to slide halfway down and he realized, hey, this is fun, I can do it! He quickly made his way to top and barrelled down, radiant with pride that he was finally one of the big kids.

By the time we left, Nico was swimming on his own underwater, sans goggles and ear plugs, at age four. What a transformation from the boy who screamed in the shower!

Of course, Nico could have learned to swim in Ottawa at the community pool. But it would have been a much more miserable process, given the difficulties of getting to the pool and the slow progress of once-a-week lessons instead of everyday playtime.

What these two stories have in common for me is that they involve easy immersion: taking away the barriers to an activity and making it a significant and natural part of daily life. Sometimes travel is the best way to get easy immersion, particularly in languages, sports, and culture. And travel automatically includes easy immersion in the practice of flexibility, adventure, and making new friends.

Did I miss out by not travelling as a kid? Perhaps, although I found other things to immerse myself in – reading, music lessons, needlepoint. But I love that my children get to cultivate their wanderlust in the real world and not just on the page.

Alison Gresik is the author of Pilgrimage of Desire: An Explorer’s Intimate Journal of Art and Flow as a Way of Life. You can read an excerpt of this travel memoir and back the project’s fundraising campaign on Indiegogo before June 6. She also coaches writers and artists who are prone to depression and want to make their art more of a priority. She and her husband blog about their journey as a famiy and their travels at Many Lives.