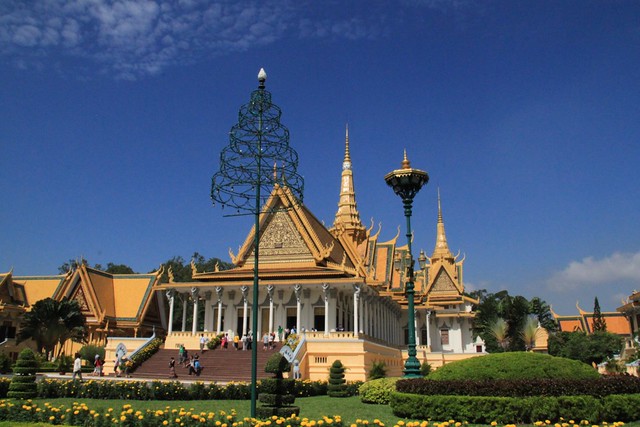 When you’re planning a family holiday to South East Asia, Cambodia might not immediately spring to mind. But perhaps it should!

Cambodia is a fascinating country that is easy to travel in and offers a lot of amazing things to do with kids, and the capital, Phnom Penh is no different. As well as offering a huge range of family friendly activities, it’s a small compact city that’s less busy than most Asian capitals making it a lot less tiring to explore for young kids. English is widely spoken throughout Phnom Pehn and family accommodation is cheap. The Khmer people love children and are some of the most genuine, generous and happy people you will encounter anywhere in the world. From the markets to the waterfront to the museums you’ll encounter people everywhere that will just want to talk to and make friends with your children. 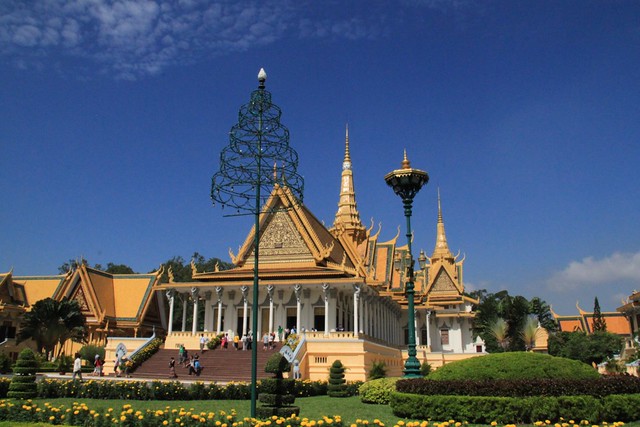 So what’s there to do in Phnom Penh with kids?

Lots! Here’s our pick of some of the best things the city has to offer for families.

Take a walk along the river

The riverfront esplanade in Phnom Penh comes to life in the evenings with families out walking, exercising and playing. It?s a great place to meet local kids or watch fishermen bringing back their catches. We even found a turtle heading towards the busy road and returned him to the river with the help of some local boys. You?ll also find food vendors selling everything from popcorn and fruit to local snacks like cricket, spider and snake. The boardwalk is wide, flat and well maintained so it’s also perfect for strollers if you are travelling with young kids. 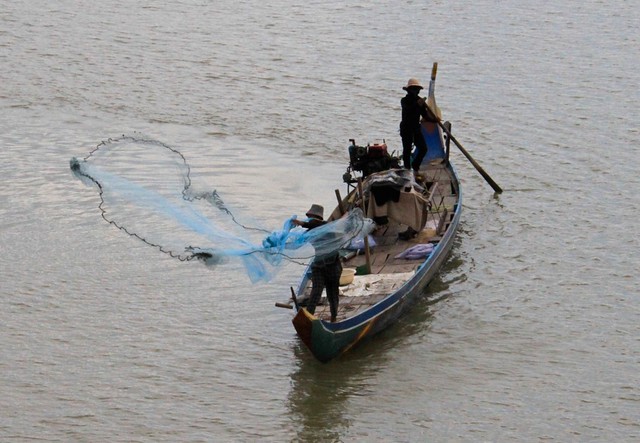 See the city by boat

River cruises offer a completely different view of the city as you motor slowly for one to two hours along the Tonle Sap River past the Royal Palace and across to the floating fishing villages on the vast Mekong River. You’ll see everything from the modern face of Phnom Penh to ancient tempes to simple villages and transport barges.

Late afternoons are the best time to go so you can enjoy the sunset, the cooler temperatures and see the fishermen coming home with their catches. To arrange a cruise just head to the waterfront and look for the guys with boat signs. It’s a good idea to bargain on the price and look at the boat first before agreeing.

At Wat Phnom you?ll find Sambo the elephant offering rides. You might even see him walking down along the waterfront in the afternoon in search of bananas. Bring some bananas of your own to feed him.

Phnom Penh has wonderful outdoor markets filled with handicrafts, wooden toys, hairclips, DVDs, children?s clothes and games. You can even get a hair cut on the side of the road for $2. Two of the best with kids are the Russian Market and Central Markets.

If you’re in town on a weekend, head to the riverside Weekend Night Market. They have a great selection of children’s clothing. The markets start around 5pm and are filled with families having picnic dinners. Don?t worry if your children are fussy eaters ? there?s a KFC take-away stand if none of the local food appeals to them.

See the city by Tuk Tuk

Tuk tuks are a cheap and fun way to cover a lot of ground in a hot city like Phnom Penh. With kids it’s not a bad idea to hire one for an hour just to drive you around the city centre. 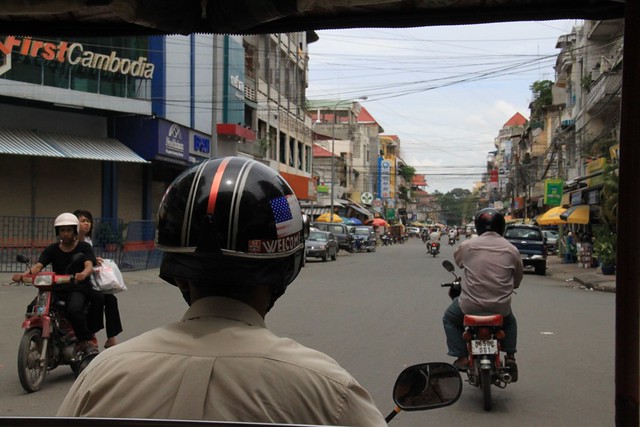 History and fish feeding at the National Museum

The National Museum in Phnom Penh has amazing artefacts and photographs from historical sites around Cambodia. It’s a great place to learn the history of places like Angkor Wat before heading to Siem Reap to explore the temples themselves. For yougner children there are a lot of carvings that will even capture their attention – hedges carved into the shape of elephants (that were admitedly a little shaggy when we were there but still entertaining), seven headed naga and people with the heads of different animals.

But of course the main attraction for younger kids will be the four ponds filled with water lillies and giant Koi that they can feed. Fish food can be bought for just 50c a bag. 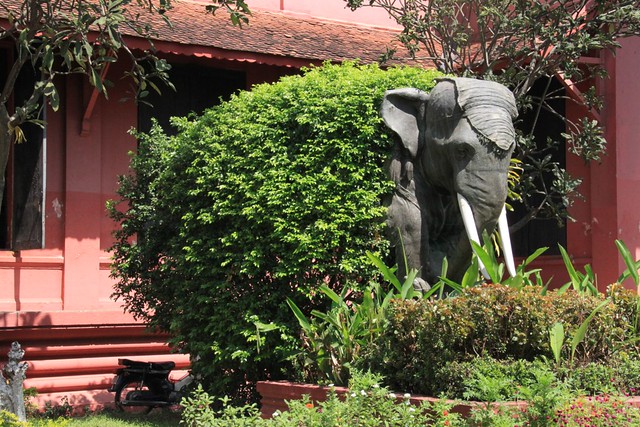 Sovanna Phum art association holds shows each Friday and Saturday night from 7.30pm. The performances include shadow puppet theater, classical and folkloric dance, theater, traditional music, circus and new performance creations. You can also visit Sovanna Phum’s puppet workshop during the day between 8am-5pm (not Sunday) to see how the puppets are made.

It’s rare to find a palace and temple that actually captures the interest of children like the Royal Palace in Phnom Penh does. First there’s the Silver Pagoda with it’s floor tiles with silver plates – perfect for little feet to make clippity-clop noises on. The gardens are filled with flowers and giant topiary trees carved into the shape of animals, teapots and other amazing shapes. Young children will enjoy playing shot the animal tree, while older kids can try to figure out how they were carved that way. A Buddha grotto set on the top of a small manmade hill is the perfect place for a picnic. Near the exit kids can learn about how the kings rode elephants and see life-sized recreations. 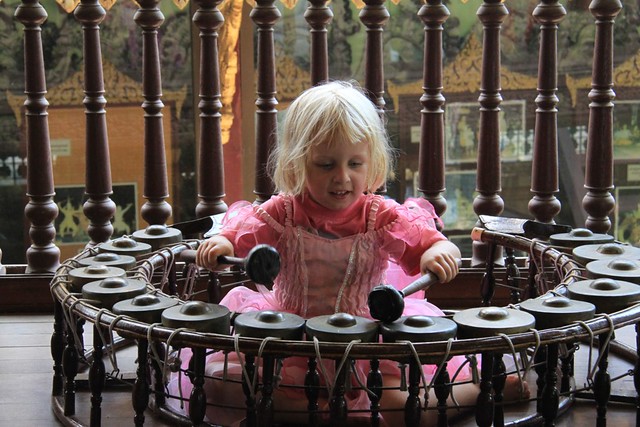 Get Wet at the Phnom Penh Water Park

It”s a little run down but the Phnom Penh Water Park is well worth a visit. There are a variety of waterslides, a large jungle gym and lots of shallow areas for smaller kids to enjoy. Weekends are the best time to visit as the largest slides are typically turned off during the week. Make sure you take plenty of sunscreen as there?s not a lot of shade! The waterpark is outside of town on the way to the airport.

Swing at the Playground at Wat Phnom

Wat Phnom is a well known temple located on a hill just near the city centre. It’s a popular attraction, with lovely carvings and paintings, and great views all set in a shady parklands. But the best reason to visit there with kids is the well-maintained playground with equipment for all ages just across the road. Buy some popcorn and fruit from the nearby venders to eat in Wat Phnom?s gardens. Just watch out for the monkeys – they can be aggressive if your children have food.

The temple is a short walk from most areas, or a $2 tuk tuk ride.

Sorya Shopping Centre, near the Central Markets, has two indoor playgrounds, a skating rink, 4D experience ride and an amusement arcade. It’s a great place to spend time on a rainy day. Just outside the supermarket on the ground floor is a real treat – high quality ice cream for less than $1 per scoop. The upper floors are a trap for parents though – cheap toys, kids clothes, shoes and DVDs. Good luck escaping without a new Transformer t-shirt and Dora DVD!

Dig in the Sandbox at Le Jardin

Hidden away in the inner suburbs of Phnom Penh is  Le Jardin restaurant. As well as serving great crepes and ice cream, the large gardens have a fantastic tree house and sandpit to play in. Le Jardin is a little out of the way so you’ll need to take a tuk tuk. It’s also not a bad idea to write down the address as some tuk tuk drivers don’t know it.

Do I take the kids to the Killing Fields and S21?

The Killing Fields and S21 are two of Cambodia’s most historical and visited sites from the Khmer Rouge years. Whether it’s appropriate for your children to go is something you need to decide for yourself. But here are the facts: If you take your children they will see human remains and photos of victims and bodies, including children. At the Killing Fields they will be stepping around bones that are still being unearthed every time it rains as they walk along the paths and hearing stories of the truly horrifying things that were done to babies, children and adults. Both sites are very confronting and many visitors become upset by the visit.

“I only went to S-21 and decided against going to the Killing Fields because I found S-21 morbid enough. It’s full of photos of people who died, including babies. It would be educational but I don’t think it’s such a good idea for kids under the age of 10”

Z, a very cool 10 year old who’s travelling the world with his Mum and blogging about his adventures at kidventurer.com

Even if feel your children are too young to understand what happened here, please remember that many of the staff and volunteers lost family members at both these sites so if your children are running or playing, visitors and staff may be upset by their innocent actions.

Our children were 3 and 5 years old when we visited Phnom Penh. We didn’t take our kids to either S21 or the Killing Fields as we felt it would be either be too upsetting or they would be too young to show the appropriate respect for such places. Instead we went separately while the other person stayed at home with the children.

Rather than visiting these sites with your children, consider buying one of the many stories written for children on the history of the region.

As well as traditional folk talkes, there are a wide range of children?s stories about land mine victims that are well-written and will help your kids understand why so many street beggars, including children, are missing limbs without going too indepth into the Khmer Rouge era. For teens there are several appropriate recent history texts or numerous accounts written by child survivors of this era. I really recommend reading “First they killed my father” and “Lucky Child” by Loung Ung if your teenager wants to understand this era more. Monument Bookstore and many non-profit organizations stock a great range of locally written children?s books, with profits going to charity.