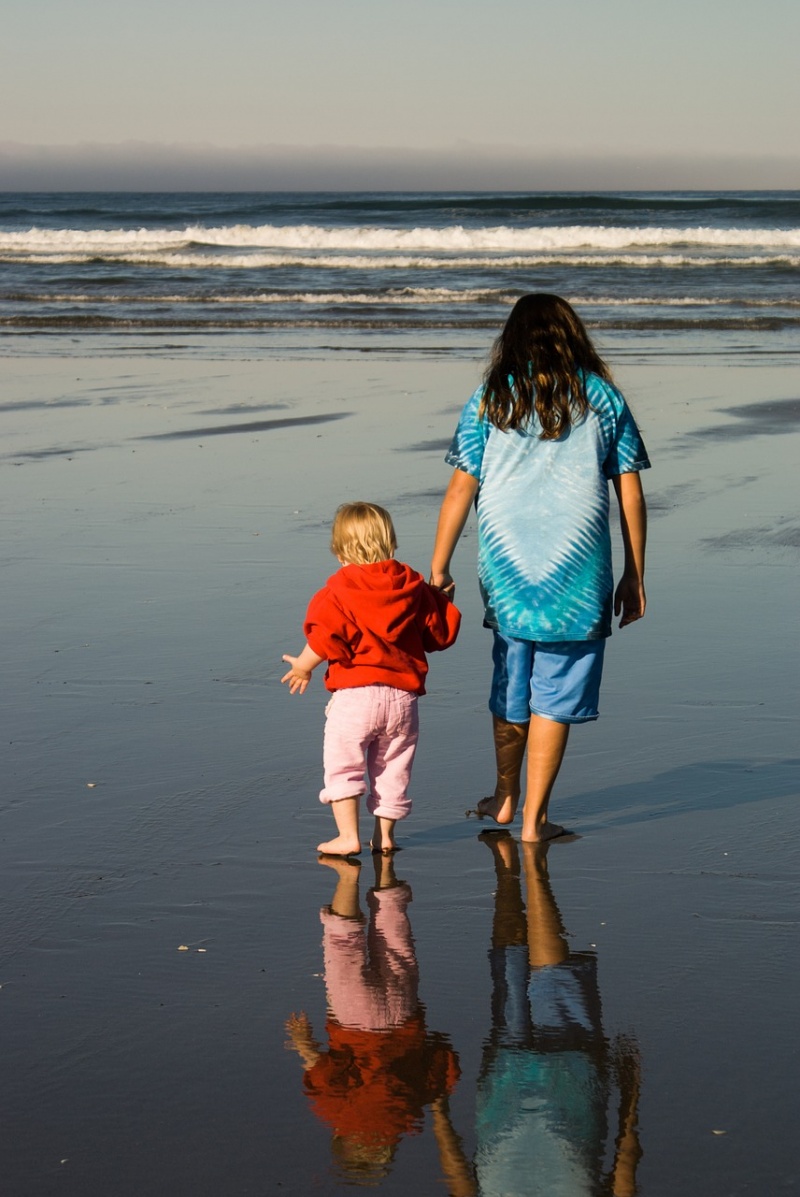 It can be hard to go to the beach. Getting all the kids and all the stuff out the door and into the car, lugging it all down to mark your spot, then keeping track of everyone while you’re there, and finally loading everything back in, plus about 50 pounds of sand, can make for a less than ideal adventure. Especially if you find that your kids aren’t having fun since tantrums, skipped naps, and sugar-induced mood swings are common here too!

With kids on the beach

But it doesn’t have to be that way. It’s perfectly possible to take your kids to the beach for a day (or a week) and not have a mental breakdown in the process. All you really need to do is plan well and use some common sense.

Basic safety at the beach is pretty simple. There are two main things to do – use various landmarks to orient yourself on the beach, and spend a few minutes watching the water. Show the kids where you are based on the landmarks. Especially if they’re old enough to go out swimming in the water, they’ll be dragged up or down the beach by the current. It’s an easy way to get lost, and happens to adults as easily as it does to kids. By using landmarks – a lifeguard tower, a weird rock, or even something you set up, like a brightly colored flag, the kids can find their way back to you easily.

children safety on the beach

Just as it’s important to know where you are, it’s equally important to watch the water. The ocean will always have a rhythm in the way the waves crash, and it usually only takes a few minutes of watching to figure it out. It will help when you get down to the water. You’ll be able to keep track of the waves, which makes getting past the breakers much easier. It also gives you time to look for any dangers – an outflow that could signal an under-toe, or a strange current that could be a rip current. If it looks too dangerous, pick another spot.

Taking kids out to the beach is actually really good for them. Everyone loves routines (including kids, even if they won’t admit it), but it’s good to break out of them sometimes. They get to try new things, see different people, and learn all kinds of new stuff. After all, the beach is basically a giant science experiment with tide pools, shore birds, fishing, and new textures.

It’s becoming more and more well known that experiences are better than possessions, and that holds especially true for children. A new toy will make kids happy for a while, but they get bored of it quickly. Even if you keep them in rotation, and try to bring “new” old toys out fairly often, kids are still adapted to them.

Experiences, however, are different. You can’t really adapt to them because they’re all different. No two days at the beach are the same, thanks to the ever changing tides and ocean currents. Dolphins might appear one day, and the next a fisherman might catch a sting ray that everyone can go see. The idea is to keep things fresh, giving your family a chance to experience new things on a regular basis.

Beach Time Does a Body Good

When was the last time you came back from the beach and you weren’t exhausted? All that sand, sun, and surf are the perfect combination to tire out even the most energetic toddlers. Even just walking in the sand is a workout since they need to focus more on keeping their balance, and watch their footing. At the end of the day, it’s always a wonderful feeling to finally fall into bed at night and still be able to feel the pull of the current and the gently bobbing of the swells.

But in addition to amazing exercise, just being near the saltwater, sea air, and seaweed is really good for you. Going to the beach is a popular past time for many human beings, and also has many benefits such as the ocean water being an old-time cure for everything from stuffy noses to eczema, and its full of nutrients and vitamins. Of course they shouldn’t drink it, but some of those nutrients will be absorbed through their skin, and, let’s face it, they’re probably going to get a mouthful or two!

Relax – You’re at the Beach!

You’re at the beach, right? So play! Your kids have no problem being in the moment and getting fully invested in what they’re doing, but it’s harder for adults. We often have so many things pulling at our attention that it can be hard to simply be, but it’s vitally important to your mental wellbeing. Take that time to stop and reconnect with your family. And, if your kids happen to turn the beach into a nudist beach, just go with it! They’re only young enough to get away with it for a little while, after all.

Kids on the beach

It’s important to take your kids to the beach. You shouldn’t avoid it simply because it was hard before. Just plan well, don’t forget food, drinks, and shade, and remember why you’re there. Now go start planning your trip!

Kacey Mya Bradley is a lifestyle blogger for “The Drifter Collective.” Throughout her life, she has found excitement in the world around her. Kacey graduated with a degree in Communications while working for a lifestyle magazine. She has been able to fully embrace herself with the knowledge of nature, the power of exploring other locations, cultures, and styles, while communicating these endeavors through her passion for writing and expression. Her love for the world around her is portrayed through her visually pleasing, culturally embracing and inspiring posts.

The Drifter Collective: An eclectic lifestyle blog that expresses various forms of style through the influence of culture and the world around us.