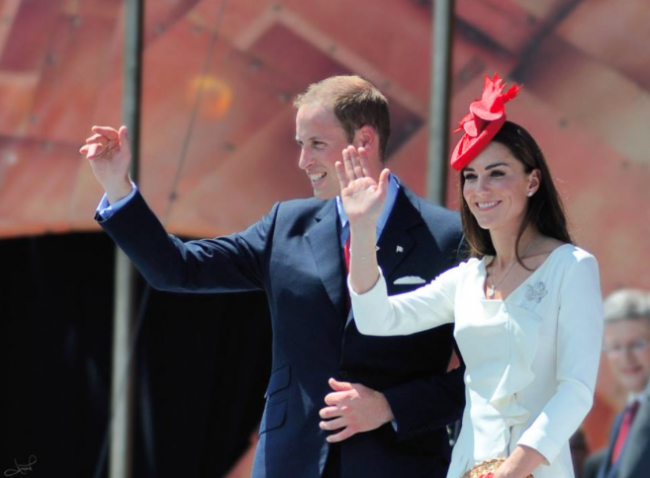 The Duke and Duchess of Cambridge and the young Prince and Princess recently completed their visit to Canada, the popular royals taking in the delights of British Columbia.

Known as ‘Super, Natural British Columbia,’ the province is blessed with amazing geographical diversity, which means there is an equally amazing variety of places to see and things to do. From cosmopolitan Vancouver, once described as “Manhattan with mountains,” to its rainforest, desert and snow capped peaks.

The Kate Middleton effect (also known as the Duchess effect) is the trend effect Catherine, Duchess of Cambridge is reported to have on others.  It’s no secret that Kate’s keen fashion sense often leads to websites crashing and brands selling out just hours after press photos are released, so a reported increase in interest and bookings for BC after the family’s latest tour should come as no surprise.

The young mother of two extremely adorable tots, 16-month-old Charlotte and her three-year-old brother, George charmed press and residents alike, their regal duties starting with a star appearance at a children’s tea party in Victoria. Charlotte’s royal tour debut, all eyes, including those of the global media, were on the youngest British princess and while not present on many of Will and Kate’s Canada excursions, some perhaps too triring and adventurous for their small children, BC is now being tipped as one of Canada’s most popular family friendly destinations to visit in 2017.

Undoubtedly, the parting words from the HRH The Duke of Cambridge as they left to return to England might be influencing the decision of those with kids in tow, many eager to follow in the footsteps of the famous foursome: “Catherine and I are incredibly grateful to the people of Canada for the warmth and hospitality they have extended to our family… We feel very lucky to have been able to introduce George and Charlotte to Canada. This country will play a big part in the lives of our children and we have created such happy memories for our family during this visit.”

Riding holiday specialist, Ranch Rider has been operating in Canada for over 20 years, its properties suited to the growing number of adventuresome families. According to Managing Director, Tony Daly, a ranch vacation is ideal for families with young children, as the majority of active pursuits are available on site or only a short drive away. Daly comments, “That familiar line uttered by the kids, “Are we there yet,” won’t be heard, as everything from horseback riding to scavenger hunts is just a step away from your cabin and with acres of land to explore and the wonder of mother nature outside your door, the words, “Mummy I’m bored,” will also be a thing of the past.

Offering family holidays for parents with children from six years, the Siwash Lake Luxury Guest Ranch is a half-day drive for guests coming directly from Vancouver, the property located in the south-central region. You won’t have to forgo your creature comforts or the royal treatment as this is one of the most exclusive ranches in Canada.

Over the months of July and August your brood will be able to sign up for the “Free-Range Kids Club”.  If you thought you would have a hard job getting your children to forget WIFI and unplug you’d be wrong, the activities for younger cowboys and girls including horse care; animal tracking; wilderness survival training and shelter building; orienteering; arts and crafts; scavenger hunts; nature walks; fort building and outdoor games.

Daly comments, “Take a leaf out of Will and Kate’s itinerary, the couple enjoying a taster of the province’s excellent wines and book yourself on an optional heli-wine tour.”

A holiday which will leave parents feeling pampered, there’s also the opportunity to unwind at the Sigh-wash, the tented spa situated in a remote forest clearing.

The Three Bars Guest and Cattle Ranch is located in the Canadian Rocky Mountains of British Columbia, between Banff and Glacier National Park. Spend quality time together on a family ride, hike or rafting trip.

Daly comments, “When the kid’s want to saddle up with their peers, those six and up can join the riding and activities program while you choose another pursuit like an ‘adult only’ horseback adventure.”

A genuine nature escape, let your brood roam to their heart’s content on the trails, catch frogs, feed the sheep, gather eggs from the chicken coup and cook marshmallows over the open fire. Perfectly designed for families, there’s also an outside play area and petting zoo.

The Sundance Guest Ranch is is located in one of the sunniest spots in British Columbia, on the edge of the interior plateau region and overlooking the spectacular Thompson River Valley. Best of all, it’s only a four hour drive from Vancouver.

Children from eight years are welcome to venture off on horseback, while little ones can enjoy a guided pony ride in the arena.

Daly comments, “There’s also a fully-supervised kid’s program for tots (three to seven years) during July and August, leaving older family members with plenty of time to hop in the saddle and explore the ranch’s 1,200 acres.”

During the same months, children are invited to the steak barbeque and country-rock event every Wednesday and Saturday – family square dancing guaranteed to make memories that last a lifetime.