Eastern Europe in winter – not as insane as you’d think 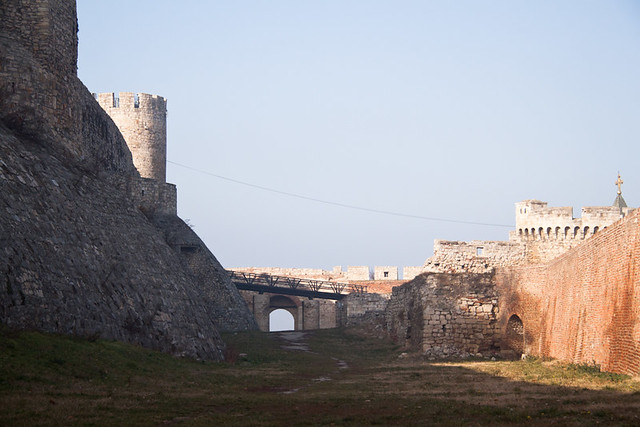 “Why? Why are you going to Europe in winter? Are you insane?”

That was the common response when we started telling people we had decided to spend three months in Eastern Europe and south-eastern Europe in winter.

The answer? Well … yes it’s possible we are insane. You’ll probably notice that it’s really only crazy Australians or people from countries that never experience true winter that think heading to somewhere cold “just for the fun of it” is a great idea.

But we’ve discovered that there are a lot of reasons why travelling through Eastern Europe in winter was actually a great idea.

There is no bad time to go to Europe!

Let’s face it, Europe is amazing no matter the weather. The history, the museums and gallery’s, the different cultures, the people, the food, the landscape: these are all wonderful no matter the time of year. Eastern Europe and south-eastern Europe is a fascinating blend of cultures with a rich history spanning thousands of years.

There is no bad time to travel in Europe with kids. 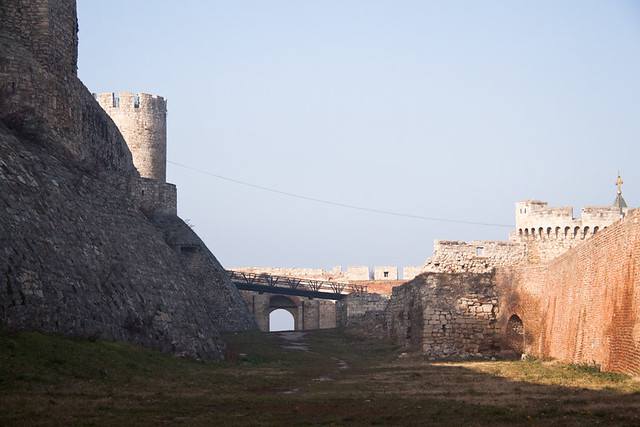 Winter in southern Eastern Europe, along with Greece and Turkey, is about as mild as it gets in Europe, well except for Spain. That was one of our primary reasons for spending our time here over say Germany and France. The bulk of the days that we’ve struck have been sunny and wonderful. It doesn’t get as dark as early here as the rest of Europe in winter so there’s plenty of daylight hours to explore outside on a nice day.

Obviously your family travel experiences are going to be different in winter than in summer because of the weather. Spending all day everyday picnicking in parks is mostly out but that’s OK. You can overdose on museums when the weather turns bad.

And once it starts to snow the castles and historical cities are in many ways more beautiful than in summer. There’s something special about traipsing around the ruins of a 1000 year old castle in the snow that you’d just miss out on experiencing if you were there in summer. 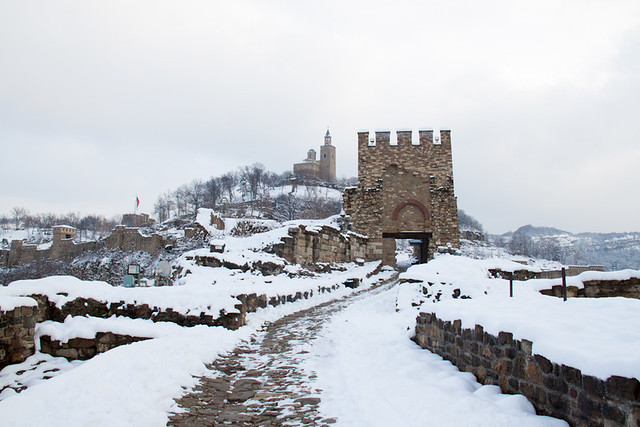 It’s still Europe, it’s still amazing regardless of whether it’s hot and sunny or snowy and cold! It’s still magical and a fantastic family travel experience.

Accommodation is even cheaper than usual

Family accommodation in many areas of Eastern Europe, particularly the Balkans, is inexpensive. But in winter it can be even cheaper.

Most hostels and hotels are quiet during winter so you can get fantastic discounts, particularly if you are staying more than three nights and ask for a discount.

On average we’ve paid 25% less per night on accommodation than we would have in summer in Eastern Europe. In summer holiday towns you can also rent apartments on monthly basis for a fraction of the cost of their summer rates.

Three months ago if someone had of told me that a holiday in Eastern Europe could be as cheap as South East Asia I would never have believed them. But we’ve discovered that if you choose the right country, watch your budget, stay in places that include breakfast and don’t overspend on accommodation, many regions of Eastern Europe can make for very cheap family holidays during winter.

In Greece we saved even more – probably a good thing as Greece is actually one the most expensive countries we’ve visited (we found it actually easier to do the UK on a budget than Greece). We paid 40 euros for a triple room with breakfast in Athens that is normally advertised at 80 euros. In both Greece and Turkey you can get some fantastic monthly rental deals in locations like the Greek Islands or Turkish summer resort towns that you’d probably never be able to afford in summer as a long term traveller. Sure you won’t be swimming in the Aegean but these regions are still gorgeous.

Tourist attractions are less crowded. We’ve had museums to ourselves. Many major attractions like the Acropolis had a fraction of the number of visitors. We have fantastic photos of these sites with no people in the picture at all. I can’t imagine getting these shots in summer. 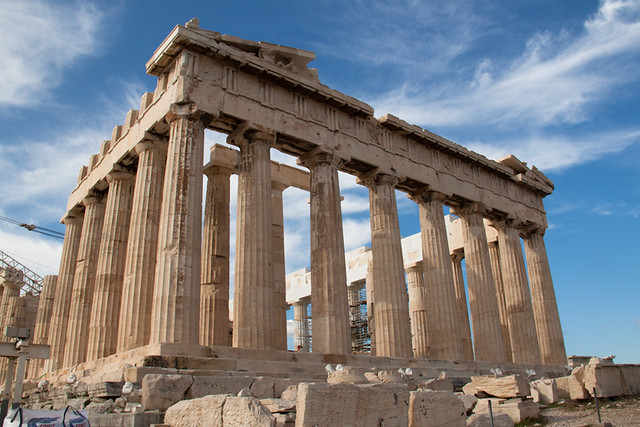 We often stay in hostels to save on accommodation and meet people. But a busy hostel can hard at times with young kids that don’t have a noise volume. That’s where winter comes in – hostels are generally quiet. There are usually just enough guests for you to talk to but otherwise you have the place to yourself. And if you are lucky you might strike a few nights with the place entirely to yourself and the staff. That can be a great chance to chat to locals and learn more about the region you are staying in.

Most buses and trains that we’ve caught have only been half full. Every train we’ve caught we’ve had 6 berth cabins to ourselves and spare seats galore on buses. Since it’s quiet there’s generally no need to book buses and trains in advance. The same day is usually fine. That’s perfect if you are as rubbish at planning ahead as we are.

The education and fun of winter

If your children have grown up in warmer countries like ours have, winter is a wonderland of fun and educational opportunities. Watching puddles and streams freeze over successive days is a great way to talk about temperature and changes of state. They’re also fun to walk on and break. Forget about getting anywhere quickly, a simple walk down the street is going to take forever with all these puddles to crush.

Playing in snow for the first time is guaranteed to keep the kids occupied for days as they explore and learn about all the fun of snow. Not to mention watching icicles form and doing your own experiments as a science lesson. Or how about doing a unit of art based on seeing the landscape transform over night from brown plowed fields to white landscapes. Even simple things like learning to put on gloves and tie up boots. And then there’s the whole topic of the seasons and talking about why it’s summer on one side of the world and winter here, why the sun sets so early. 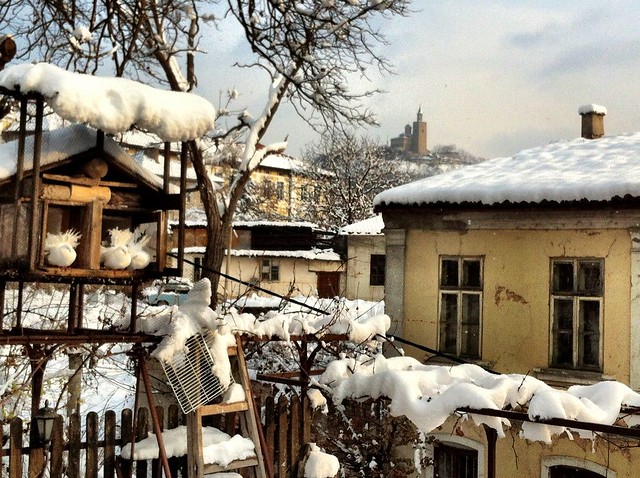 Even if your children are used to a snowy winter, travelling around Eastern Europe over the holiday period is a wonderful chance to learn about how different cultures celebrate Christmas. Christmas markets, special Christmas foods, the variations in the dates that Christmas is actually observed even in a very small region …  the kids (and us) have learned so much about how different cultures celebrate Christmas.

Skiing in Eastern Europe is a lot LOT cheaper than the rest of Europe. Accommodation, lift passes, equipment hire, restaurants, ski lessons … everything is a lot cheaper.

We’re currently staying at Bulgaria’s most expensive ski resort (it’s the most expensive but it also has the best facilities), Bansko. Hiring ski equipment is as little as 5 euros per day for children. Two 2 hour group lessons – less than 45 euros at the most highly respected ski school. Lift passes are 28 euros per day. And of course all these prices drop significantly if you take out 3-6 day hire/tickets. And remember Bansko is an expensive ski resort!

So there you have it!

We’ve loved the past few months in Eastern Europe and south-eastern Europe. When we first started planning our trip we were lamenting the fact that we couldn’t experience summer in this region as well. Now we’re looking forward to coming back to experience another winter and hopefully stay for summer. Everything about this region has exceeded our expectations. Perhaps we’d enjoy summer here more but I can definitely say we’ve enoyed our here NOT despite of the weather but BECAUSE of the weather!