Macedonica with kids: Things to do in Skopje 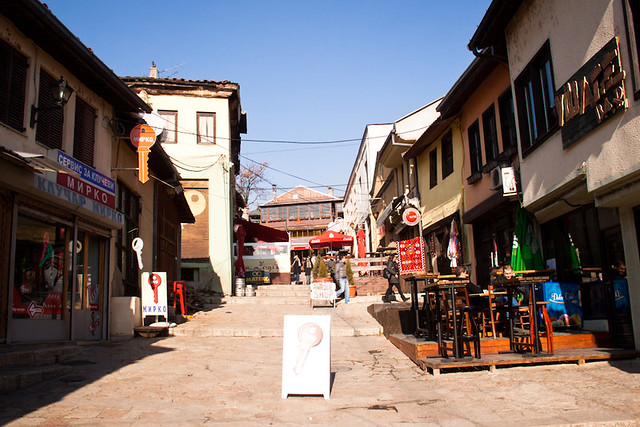 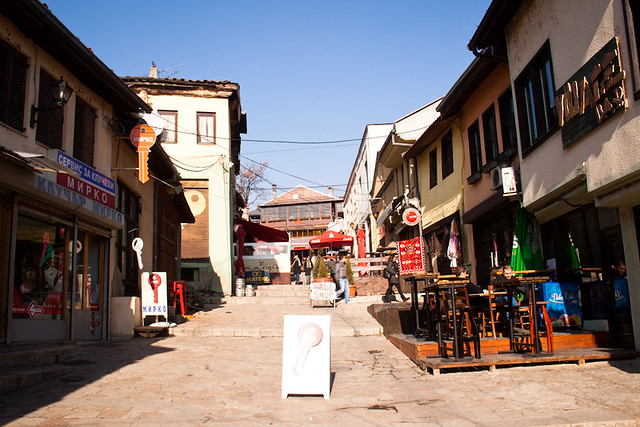 When we were in the planning stages for our trip to southern Eastern Europe, we were scouring the web for the cheapest flights from London into the region. We knew ground transport was relatively cheap once we got there so we didn’t mind where we started, we just had to get into Eastern Europe and start from there.

Then we stumbled across ridiculously cheap flights from London to Skopje, Macedonia. It was a destination that we previously hadn’t even considered, mainly because we knew next to nothing about Macedonia. Sure there were faint recollections of European history lessons from high school and a basic idea of where Macedonia was … which turned out to be another country completely but not that far off the mark!

A quick google search was enough to convince us that Skopje seemed like a fascinating city to spend a few days in so we booked the flights. In the end we had an amazing stay and will definitely go back.

While Skopje doesn’t offer a plethora of kid friendly museums and playgrounds, we found a lot of things that captured the kids attention.

Overlooking the river in the centre of town, Kale Fortress is hard to miss. It’s imposing against the skyline in a magical “oh wow there’s a giant castle” way.

The fortress was originally built in the 6th century, but there is evidence that humans have used the site for it’s strategic importance as the highest point in the valley and proximity to the river for over 6000 years. 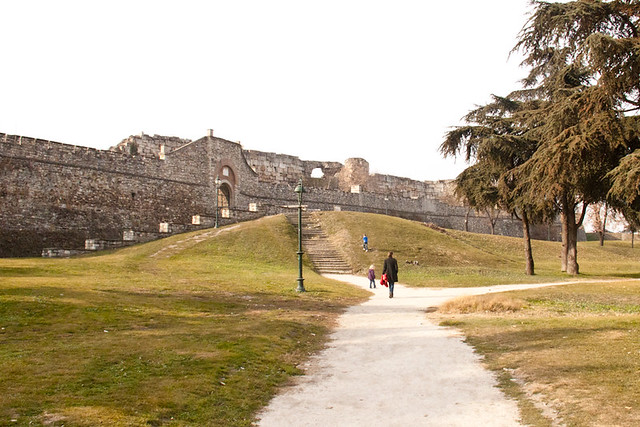 It really is a must see with kids for the views of the city and the chance to run around and explore. Unfortunately it was closed on the day we went there but we were still free to wander around the outside, climb and race in the gardens, peer through all the entrances and gaze over the city. The kids loved it.

From Kale Fortress it’s just a short walk down the hill is the Old Bazaar, the largest Turkish markets in the Balkans outside of Istanbul. The bazaar has been the city’s centre of commerce and trade since the 12th Century. It’s a maze of twisting cobbled streets filled with shops, marketplaces, old Turkish bathhouses that have been converted to museums and galleries, and over 30 mosques.

The best part of walking around here with kids is you never quite know what’s around the next corner. One street will be filled with jewellery stores, bright wedding dresses and antique stores. The next street will be butchers sitting side by side sock shops, burger bars next to shoe stores, Turkish tea houses next to bag stores. We discovered lolly shops, a full set of traditional armour and ancient bathhouses. Most of the streets are a no-go zone for cars so it’s a perfect place to walk around with kids. 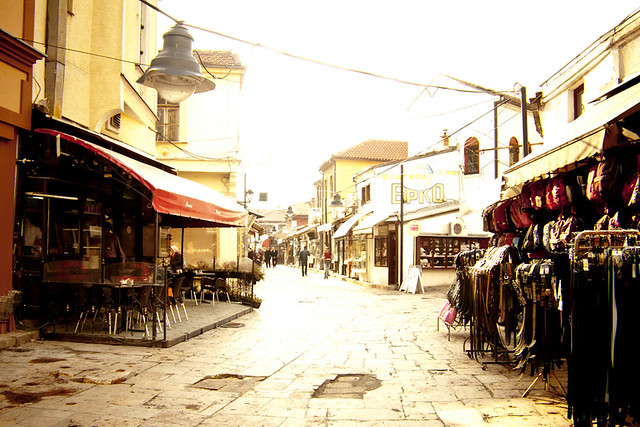 At the edge of the Old Bazaar is marketplace with vendors selling everything from winter gear, clothing, electronics, shoes and bags. Even fireworks! There’s also a large fresh food market selling meats, spices, yogurt, fruit and vegetables. In my entire life I’ve never seen fruit and vegetables look as good as the produce on sale here. It’s all inexpensive too – a bag of ten mandarins and five bananas cost us 2 Euros.

The Old Bazaar is the perfect place for lunch. For less than 6 euros you can feed a family on kebabs, grilled chicken, bread, french fries and salad.

To get to the Old Bazaar from Kale Fortress, wind your way down the backstreets past the Turkish mosque heading away from the river veering slightly right and you’ll find your way. Otherwise the quickest and easiest way is to walk across one of the cities many bridges. The stone bridge brings you right to the heart of the area.

In the heart of town next to the Vardar river sits a fantastic place to explore with kids and learn the cities history – the Macedonian Square and Old Stone Bridge. The whole area is wide, open and another no go zone for cars so it’s great for families.

The Square is filled with giant statues of important figures from Macedonian history. It’s hard to miss Alexander the Great atop his horse 26m high in the centre of the fountain surrounded by lions. 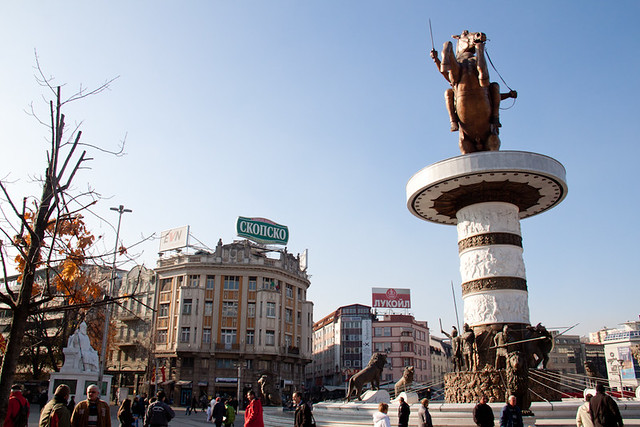 There’s also an abundance of coffee shops, restaurants, bookstores and clothing stores. Nearby you’ll also find the Old Railway Station, now a museum and a memorial house to Mother Theresa who’s family home was located just nearby. On the day we were there we were lucky enough to see a skateboarding class that had been set up along the riverbank.

Connected to the Square is the Stone Bridge, considered the symbol of the city. No one quite knows how old it is because ever person to conquer the city has had a go at rebuilding it at some point. The current bridge is thought to be from the 15th Century. It’s a pedestrian bridge so again, perfect with kids due to the lack of cars! 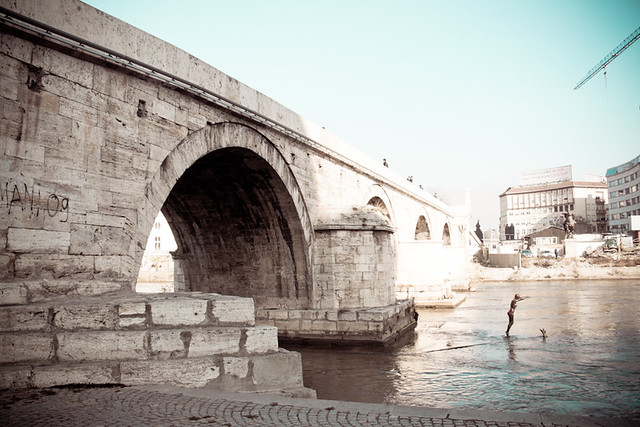 The whole area is undergoing huge renovations at the moment, which spoils the outlook in some aspects but in other ways it’s fascinating to see gleaming new buildings emerging against classical 19th Century architecture and the ancient bridge.

Known to the taxi drivers as ‘Big Vero’, Vero Shopping Centre is just past the centre of town near the bus station. It’s not huge but it has two fantastic things – one of the most inexpensive toy stores I’ve ever seen and more importantly – a free indoor playground. Perfect if you strike bad weather, but worth a visit regardless. 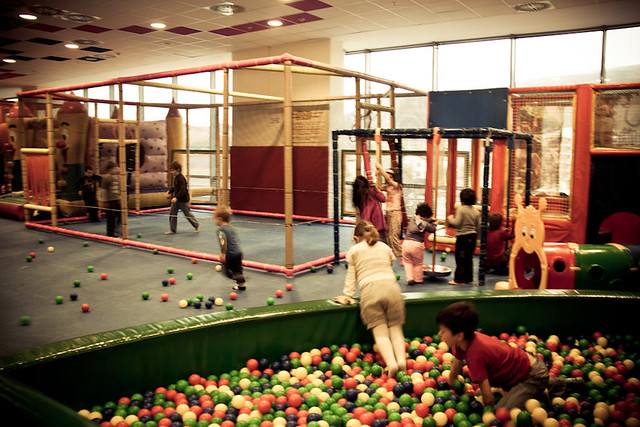 The best part is the playground is next to McDonalds and a string of coffee shops so there are plenty of tables for parents to sit down at and relax while the kids play.

We spent four days in Skopje and ended up there three times, each time spending between 2-6 hours there. In our defense it was winter and we had a couple of wet days!

Just a 15 minute walk from the centre of town past the football stadium, City Park is a huge green expanse housing the city’s zoo, several monuments, a small fairground and museum. The zoo has long had a bad reputation for it’s unethical treatment of animals so you may want to research this before you go. Otherwise the park is filled with large expanses of areas to run around, several small lakes, a playground, restaurants and cafes.

If you strike nice weather while in Skopje and the kids need to burn off some energy, this is the place to go!

Your biggest expense is accommodation. After that it’s a very very inexpensive city.

We quite comfortably spent between 70 – 85 euros per day, including accommodation, eating out two meals a day, taxis, snacks, sightseeing and even buying a couple of new toys and colouring supplies. Accommodation was half of our expense.

A week in Skopje won’t be as cheap as a week in Thailand, but it’s not far from it.

Skopje has a lot of hostels and hotels with doubles, triples and family rooms. Most places charge between 60-80 Euros per night for a family room, but you can find some for as low as 40 Euros. It’s also worth checking the price of dorm beds as many places seem to charge half price for children or less.

If you are there in low season and staying more than a few nights it’s worth asking for a discount. Quite a few places offered us 10 euros off the rack rate per night.

We stayed at the newly opened Urban Hostel. For 60 euros per night they have an apartment with a double bed, double sofa bed, kitchenette and lounge room, and a bathroom with jacuzzi. The rate included breakfast. The apartment was fantastic, but they also have double and 4 bed dorm rooms. The staff were lovely and friendly towards the children, particularly Eva who completely won the kids over. The hostel is set in a converted house it with a yard and lounge room. It’s a 10 minute walk to the centre of town but there are plenty of taxis and places to eat nearby. We’d happily go back and rent that apartment for a month!

Is it a good city to explore with kids?

Skopje is compact and flat, with lots of sidewalks that are actually used as sidewalks so it’s easy to walk around. Most of the things you will want to explore are centrally located as well so you won’t have to walk for days to see everything. Apart from a lot of air pollution (it’s winter so there are a lot of wood fires burning on top of the usual factory smoke), it was a clean and beautiful city.

Taxi’s to anywhere within the city are between 1-3 euros so even if little legs get tired, catching a taxi home isn’t going to break the bank. There are lots of buses but we found it just as cheap and easier with the kids to catch taxis.

Walking around the city seemed very safe. People were friendly, particularly towards children. The city was very developed, with a fascinating mix of old and new. Glass enclosed high-rises and giant outdoor television screens next to ancient stone bridges and just a short walk from market places that have been in use for almost 1000 years.

The food was simply amazing. With an abundance of the local style kebabs (which are essentially skin-less mince sausages), grilled chicken, locally grown fruits and cheese filled breads it was even easy to find food that the children enjoyed. Corner stores selling drinks and snacks were everywhere and fresh fruit markets are common.

Apart from road signs, most signs and restaurant menus were written in Cyrillic but we had no problems finding people who spoke English. Almost every second person seemed to know at least some English, every third person spoke it with enough fluency to have a conversation. German was also widely spoken so when English failed we resorted to charades and Colin’s rusty German.

How long to spend in Skopje with kids?

We spent four nights in Skopje and by the end of our first day we were pretty much in love with the city. You could see everything in three days but a lot of places like the old market area and the indoor playground at Vero you’ll probably be happy to go back to again and again. Four nights was good, but we would have been happy to stay a week.